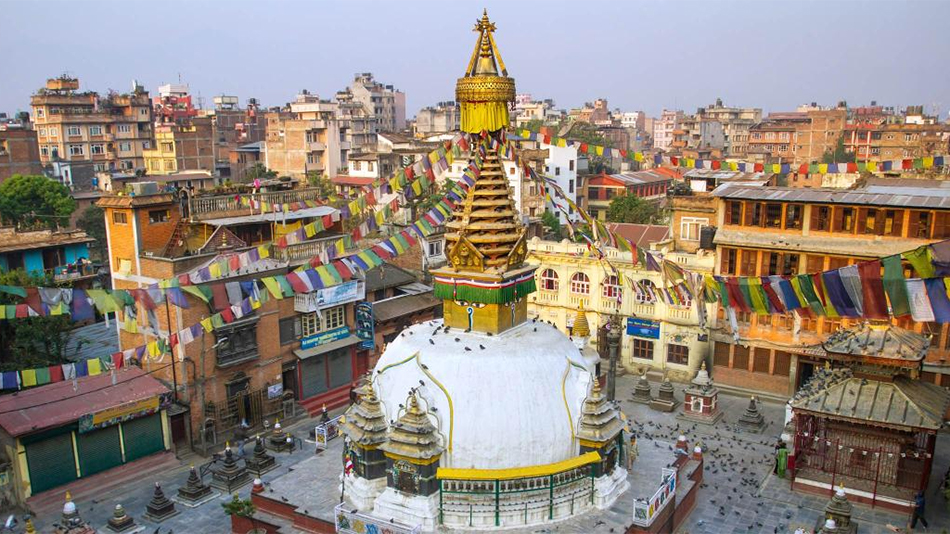 Arrive Kathmandu. On arrival, meeting and assistance at the airport and transfer to Hotel. The balance of the day free at leisure.

Kathmandu is known as Kantipur, the capital of the Kingdom of Nepal. Here you will visit the temple of the Living Goddess who acknowledges the greetings of the devotees from the balcony of her temple residence. Bhimsen Mandir, Shiva & Parvati Temple, Big Bell, Jaganath Temple, Garuda Statue, Ivory Window, Taleju Temple, Statue of Kal Bhairav – the Durbar Square are with its array of temples overlooked by the Hanuman Dhoka Palace, the ancient place of the Nepalese Royalty.

Swayambhunath is said to be 2558 years old and one of the World’s most glorious Buddhist Chaityas.
The Chaitya or Stupa which forms the main structure is composed of a solid hemisphere of brick and earth supporting a lofty conical spire capped by a pinnacle of copper gilt.Painted on the four-sided base are the all-seeing eyes of Lord Buddha. This hill is a mosaic of small Chaityas and Pagoda temples.

Patan City: 5 kms. /3 miles away from Kathmandu City. Patan also known as Lalitpur is the city of fine arts, enclosed within 4 stupas said to be built in 3rd century AD by Emperor Ashoka. You will see the Durbar Square, the Patan Durbar which houses a bronze collection, the Krishna
temple built by King Siddhi Narsingh Malla and Hiranya Varna Mahavir.

A trip to the Tibetan Refugee Camp and the Handicraft Centre will also be done while, visiting Patan where you will witness the hand weaving of Tibetan carpets and moldings of metal statues.

Day 03: Kathmandu
Breakfast at Hotel
This morning, enjoy a tour of Pashupatinath and Bodhnath

Pashupatinath: Situated 5 kms. East of Kathmandu City, Pashupatinath temple is one of the holiest temples dedicated to Lord Shiva. Situated amidst a lush green natural setting on the bank of the sacred Bagmati River, the temple built in pagoda style has gilted roof and richly carved silver doors. Visitors will be permitted to view the temple from the east bank of Bagmati River, entrance in the temple being strictly forbidden to all non Hindus. Pashupatinath is the centre of annual pilgrimage on the day of shivaratri which falls in the month of February/March. Behind the temple are the cremation grounds.

Bodhnath: This Stupa, 8 kms. East of Kathmandu City is one of the biggest in the world of its kind. It stands with four pairs of eyes in the four cardinal direction keeping watch for righteous behavior and human prosperity. This Buddhism Stupa was built by King Man Deva at the advice of the Goddess Mani Jogini. It is built on an octagonal base inset with prayer wheels. The shrine is ringed by houses of Lamas or Buddhist priest.

Continue to visit Bhadgaon in the afternoon.

Bhadgaon: Also known as Bhaktapur meaning city of devotees, this place is the home of medieval art and architecture. Lying 14 kms. /9 miles east of Kathmandu City, this place was founded in the 9th Century and is shaped like a conch shell. The city is at the height of 4600 ft. above sea level. In Bhadgaon, you will visit the Durbar Square with its array of temples overlooked by the Palace of 55 windows built by King Bupatindra Malla. Here you will also visit the Dattatatraya Temple, Nyatapola Temple, Bhaiav Temple, Pottery Square, Peacock Window and Priest Palace.

MANAKAMANA TEMPLE
Manakamma who is believed to have the power to fulfill wishes. The temple of Manakamana lies 125 km to the west of Kathmandu. Cable-car ride starts at Cheres, 104 km from Kathmandu on the highway to Pokhara. Manakamana temple lies 12 km south of historic town Gorkha and located on a prominent ridge (1302m) overlooking the river valleys of Trisuli (south) and Marshyandi (west). The unique location of the place is dramatized during winter when the ridge appears as island above the sea of morning mist. People believe Manakamana Devi fulfils the wishes of her devotees, thus called the wish fulfilling deity.

Overnight at Hotel in Pokhara

Day 05: Pokhara
After a leisurely Breakfast at your hotel, proceed for sightseeing tour of Pokhara City and enjoy Lunch at one of Pokhara’s famous lakeside eateries.

After lunch, you will be provided with boat ride of the awe-inspiring Phewa Lake.

POKHARA
The rare combination of snow-clad peaks and snow fed lakes and rivers has helped to make the valley of Pokhara (210kms/131 miles from Kathmandu) one of the most picturesque natural attractions in the kingdom. It is located virtually in the geographical center of Nepal. Located on the main road between Kathmandu and Bhairahawa, there may be no other place in the world from where Great Himalayas peaks can be admired from such a close distance. The Bindhyavasani Temple on its well-kept platform overlooks a modest amusement park. Phewa Lake, skirted by a large numbers of unpretentious lodges and simple restaurants, is the most congenial spot for visitors.

The rest of the afternoon is free at leisure.
Overnight at the Hotel in Pokhara.

Day 06: Pokhara – Kathmandu
Leisurely breakfast at your hotel. Then enjoy the scenic drive back to Kathmandu taking in the familiar sights. Lunch enroute to Pokhara on your own. Arrive in Kathmandu by late noon and transfer to Hotel.
Evening on your own for last minute shopping.

Day 07: Kathmandu Departure
Breakfast at Hotel and then transfer to the airport for your onward flight.

$750
Land only per person based on sharing

$825
Land only per person based on sharing

$925
Land only per person based on sharing

Be the first to review “Glimpse of Nepal” Cancel reply