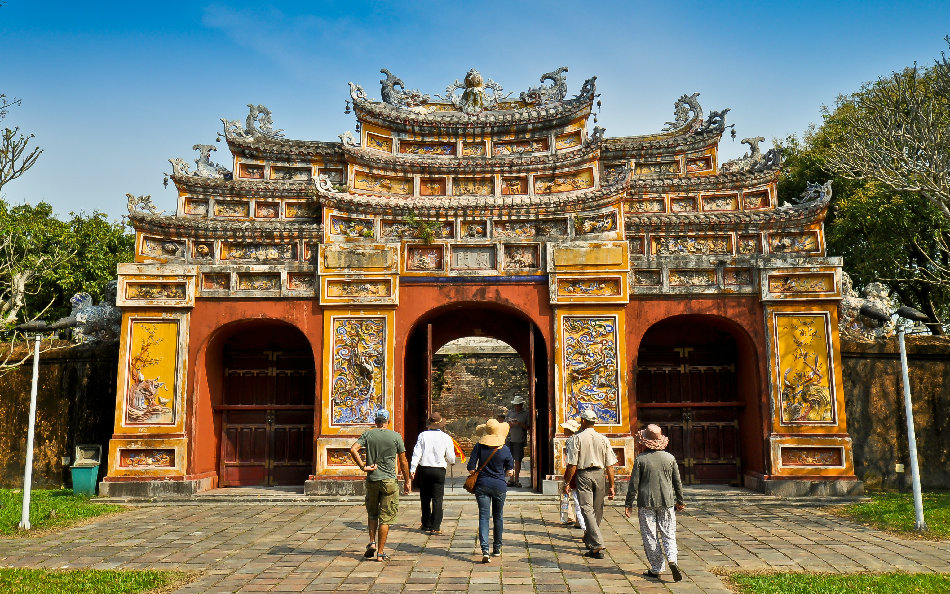 Day 2 Hanoi – Halong (Breakfast: Hotel )
Full day sightseeing in Hanoi
Although it is the modern-day capital of Vietnam, Hanoi still retains the mystery and charm of past centuries. Narrow lanes and traditional shop houses invite an exciting exploration by walking, while its many beautiful public spaces – lakes, parks, tree-lined boulevards and monuments – give the city an air of elegance and harmony with nature unique among Asian capitals. Begin your day visiting the HO CHI MINH’s STILT HOUSE, the simple two-room dwelling where Ho Chi Minh lived from 1958 until his final days ( 1969). Preserved in the same condition as during his life, it may be viewed through the windows. Continue to the miniature ONE PILLAR PAGODA. Also dating from the 11th century, this monument was rebuilt after being destroyed by the French in 1954.
The TEMPLE OF LITERATURE, a peaceful series of walled courtyards and graceful gateways, and one of the best serving examples of traditional Vietnamese architecture. Founded in 1070 and dedicated to Confucius, this was also the site of Vietnam’s first university.
Finally, discover the OLD QUARTER of Hanoi by walk. This fascinating network of narrow alleys and shophouses is also known as ‘The 36 Streets,’ each street being named after the merchandise traditionally sold there, ranging from fabrics to crafts to medicines to tombstones. A handicraft-lover’s paradise and a endlessly interesting place to explore local life.

By vehicle from Hanoi (city) to Halong Bay

Day 3 Halong – Hanoi – Hue (Breakfast: Hotel / Lunch: Meals included in itinerary (Vietnam) )
Excursion by boat through Halong Bay including lunch
Board a traditional wooden junk and begin cruising through the beautiful Halong Bay. Enjoy lunch while passing interesting rock formations including Stone Dog, Incense Burner (Dinh Huong) and Fighting Cock (Ga Choi). Visit one of the caves in the centre of the islands such as Thien Cung (Heavenly Residence Grotto). Cruise back to Halong Pier and disembark.

By vehicle from Halong to Hanoi (Noi Bai Airport)

Flight from Hanoi to Hue

Sightseeing in Hue
Hue served as the capital of Vietnam for more than 140 years. It houses ancient temples, imperial buildings and French-style edifices. It was established in the 17th century.

Visit the Old Imperial City
Located in the heart of Hue is the Imperial Citadel, a vast complex built in the early 19th century and modelled after the Forbidden City of Peking. The original walls stretched for 10 km and were surrounded by a wide moat. Today, most of the buildings have been destroyed due to bombing during the Vietnam-American War, but the monuments that remain provide a fascinating glimpse into the court life of the Nguyen Dynasty. Approach the city past the striking Flag Tower, where a giant Vietnamese flag waves proudly overhead, to the imposing Ngo Mon Gate, the main entrance to the Imperial Enclosure. Enter into an area of spacious courtyards and serene lotus ponds, and visit Dien Tho Residence (Dien Tho palace) where the Queen mother lived, visit Thai Hoa Palace, the magnificently decorated reception hall, the Halls of the Mandarins, and the original Nine Dynastic Urns, among other sites, including a visit to the Hue Royal Antiquities Museum..

Day 5 Hue – Danang – Hoi An (Breakfast: Hotel )
Visit the Imperial Tombs of Tu Duc and Khai Dinh
Venture into the countryside around Hue to the Imperial Tomb of Tu Duc. Tu Duc, the longest reigning Vietnamese emperor, designed and built this elegant tomb during his lifetime, using it as a retreat for meditation, reading and theatre performances. Take some time to soak in the tranquil atmosphere, wandering among the gracefully proportioned pavilions, courtyards and lotus ponds. Afterwards visit the Imperial Tomb of Khai Dinh, dramatically located on a hillside. The last of the monumental tombs of the Nguyen dynasty, completed in 1931, this tomb incorporates distinct European elements into traditional Vietnamese architecture.

By vehicle from Hue to Hoi An
Drive south from Hue along scenic mountain roads with spectacular views over the coastline. Highlights along the way include the dramatic Hai Van Pass, the high dividing line between the climate zones of North and South Vietnam; Lang Co, a lovely stretch of beach curving outwards between a clear blue lagoon and the East Vietnam Sea; and the large coastal city of Danang.

Visit Cham Museum
The Cham Museum houses probably the best collection of Cham art to be found anywhere in the world. There are more than 300 artefacts in the museum, many dating to the 4th century. There are beautiful sculptures reflecting the 1000 year Cham period.

Day 6 Hoi An (Breakfast: Hotel )
Sightseeing in Hoi An with a boat trip on the Thu Bon River
The exquisitely preserved merchant town of Hoi An was declared a UNESCO World Heritage Site in 1999. Its colourful shop houses and temples reflect a diverse heritage, dating back to the 16th and 17th century, when it was a major port for Western, Chinese and Japanese traders. Today it is a thriving centre of traditional crafts and a shopper’s paradise, best explored on foot.

Wander through the cobbled streets, past low tile-roofed buildings, the bustling central market and the small harbour where colourfully painted boats are moored. The walking tour will include visits to a private house, where members of the same family have lived continuously for centuries in a traditional setting; to one of the family chapels built by prominent merchants and official families as centres for ancestor worship; and to a typical Chinese-style Pagoda or assembly hall. Continue to Sa Huynh MUSEUM, located near the Japanese Covered Bridge, it contains exhibitions from the earliest period of Hoi An’s history. Visit a handicraft workshop in Hoi An where local products are being made by the industry itself. Finally, continue to the famous Japanese Covered Bridge, first constructed in 1593 by the Japanese community of Hoi An to link the town with the Chinese quarters across the stream.

In the afternoon, board a local boat and cruise down the Thu Bon River, enjoying the unspoiled countryside and stopping to visit a pottery village and a woodcarving village before returning to Hoi An harbour.

Overnight in Hoi An.

Day 7 Hoi An (Breakfast: Hotel )
Full Day excursion to My Son
Journey to My Son, the former religious centre of the Champa Kingdom, a sophisticated civilization which held sway over the region from the 4th to the 13th centuries. Today, all that is left are five archaeological sites from different periods, in a beautifully green setting of hills and winding streams. After a brief visit to the Visitor’s Centre for an overview of Cham history and culture, visit each ruin in turn, walking along forested paths.

Overnight in Hoi An.

Day 8 Hoi An – Danang – Saigon (Breakfast: Hotel )
Transfer to Danang airport this morning for your flight from Danang to Saigon
Upon arrival, meet your tour guide and transfer to Cu Chi Tunnels.
Never discovered by American forces, the Cu Chi Tunnels were an important Vietcong base during the American War. Stretching over 200 km, this incredible underground network, dug by hand out of hard laterite, connected command posts, hospitals, shelter and weapons factories. Today, walk through the area and learn about the day to day life of the Vietcong, bear witness to the cleverly disguised entrances and elaborate booby-traps, and even venture inside the tunnels, some of which have been modified to accommodate tourists.

Day 9 Saigon (Breakfast: Hotel )
A Day in the Mekong Delta (Full day)
From Saigon, drive into the heart of the Mekong Delta the small town of Cai Be with an elegant Neo-Romanesque Cathedral at the town center recalling the presence of the French colonialists back in the 19th century. Embark on one of the local boats to explore the riverside village in which local families are running age-old cottage industries. Pay them a visit and see how the delta residents make traditional treats including dried longans, rice pancakes and puffed rice candies, a chance to sample these local delicacies. Continue the trip across a main flow of the mighty Mekong then follow narrow waterways through peaceful lush green orchards and also lively scenes of well inhabited canals. Disembark at Vinh Long and return to Saigon.

Day 10 Saigon (Breakfast: Hotel )
Half Day sightseeing in Saigon
A vibrant metropolis, Saigon teems with energy, activity and motion. Everywhere you look, you see the meeting of traditional and modern life. Begin with a tour of the historic centre, strolling along Dong Khoi Street, formerly known as the Rue Catinat, the main shopping thoroughfare and heart of old colonial Saigon. Pass by classic European-style landmarks such as the ornate City Hall (Hotel De Ville), the old Opera House (both may only be viewed from the outside), and pay a quick visit to the neo-Romanesque Notre Dame Cathedral and the Central Post Office.
Afterwards dive into modern history with a tour of the Reunification Palace. Formerly the Independence Palace of the South Vietnamese president, this 60s style was famously stormed by tanks on April 30, 1975 signifying the fall of South Vietnam. It has been preserved in its original state, and the original tanks remain on display near the entrance gates. Continue to the harrowing War Remnants Museum, which comprehensively documents the travails of the long Vietnam- American War. Inside are detailed photographic exhibitions; outside is a collection of tanks, planes and weapons. A powerful experience, this museum is guaranteed to provoke strong emotions. Finally, visit the Emperor Of Jade Pagoda, one of Saigon’s most interesting pagodas.

Transfer to the airport in the afternoon for your onward journey.

$1209
Land only per person based on sharing

$1315
Land only per person based on sharing

$1675
Land only per person based on sharing

Be the first to review “Vietnam Explorer” Cancel reply