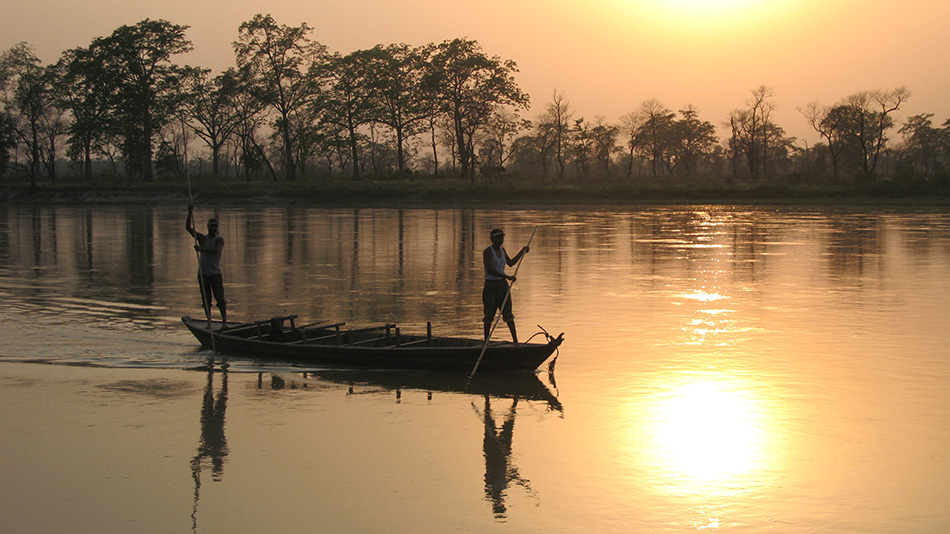 Arrive Kathmandu. On arrival, meeting and assistance at the airport and transfer to Hotel.
Afternoon sightseeing tour of Kathmandu City and Swayambhunath.

KATHMANDU CITY
Known as Kantipur, the capital of the Kingdom of Nepal. Here you will visit the temple of the Living Goddess who acknowledges the greetings of the devotees from the balcony of her temple residence. Bhimsen Mandir, Shiva & Parvati Temple, Big Bell, Jaganath Temple, Garuda Statue, Ivory Window, Taleju Temple, Statue of Kal Bhairav and the Durbar Square with its array of temples overlooked by the Hanuman Dhoka Palace,the ancient place of the Nepalese Royalty

SWAYAMBHUNATH
Located approximately 4 kms. /2.5 miles, this Buddhist Stupa is said to be 2558 years old. The Stupa which forms the main structure is composed of a solid hemisphere of brick and earth supporting a lofty conical spire capped by a pinnacle of Copper gilt. Painted on the four sided base of the spire are the all seeing eyes of Lord Buddha. This hill is a mosaic of small Chaityas and Pagodatemples.

This evening, enjoy a presentation of Nepalese Cultural dances followed by Nepalese dinner at a local Restaurant.

MOUNTAIN FLIGHT
6.30 AM: One-hour daily Mountain flight is operated by Airlines, to view the mighty Himalayan peaks including Mt. Everest. This is the closest one can go to the peaks without having to trek. Please note that the flights do not land anywhere all you will be offered is an aerial view. Duration of the flight will be around 45 minutes to an hour. The operation of the flight is strictly subject to weather condition.

Nagarkot is one of the most scenic spot situated about 35 km east of Kathmandu from where an excellent view of snow-capped peaks of the Himalayan Ranges in eastern Nepal can be seen (if weather permits), as well as renowned for the spectacular sunrise. The top of Nagarkot commands accelerating views in all directions. The altitude of Nagarkot is 2229 m. /7133 ft. above sea level.

Bhadgaon: Also known as Bhaktapur meaning city of devotees, this place is the home of medieval art and architecture. Lying 14 kms. /9 miles east of Kathmandu City, this place was founded in the 9th Century and is shaped like a conch shell. The city is at the height of 4600 ft. above sea level. In Bhadgaon, you will visit the Durbar Square with its array of temples overlooked by the Palace of 55 windows built by King Bupatindra Malla. Here you will also visit the Dattatatraya Temple, Nyatapola Temple, Bhairav Temple, Pottery Square, Peacock Window and Priest Palace.

Day 03: Kathmandu – Chitwan
Breakfast at Hotel and then transfer to the airport for a short flight to Chitwan National Park.
The Chitwan National park, the lush Valley of Chitwan situated in the foothills of Churia ranges, is 75 airmails South West of Kathmandu, houses the first National Park of the Kingdom. The Chitwan National Park is famous or its variety of Wildlife especially the Great Indian One horned Rhinoceros and the elusive Royal Bengal Tiger. There are many Wildlife Lodges/Camps operating Safari style Lodges within the park area and offer Elephant excursions in the heart of the Jungle to view game.

Overnight at the Lodge.

Overnight at Hotel in Pokhara

Day 05: Chitwan – Pokhara
Early morning another jungle activities.
After breakfast, depart Chitwan for Pokhara by road which will take 4 and a half hours to 5 hours drive approximately.

Upon arrival in Pokhara, transfer to the hotel. Later enjoy a sightseeing tour of Pokhara City and a boat ride of the awe-inspiring Phewa Lake.

POKHARA
The rare combination of snow-clad peaks and snow fed lakes and rivers has helped to make the valley of Pokhara (210kms/131 miles from Kathmandu) one of the most picturesque natural attractions in the kingdom. It is located virtually in the geographical center of Nepal. Located on the main road between Kathmandu and Bhairahawa, there may be no other place in the world from where Great Himalayas peaks can be admired from such a close distance. The Bindhyavasani Temple on its well-kept platform overlooks a modest amusement park. Phewa Lake, skirted by a large numbers of unpretentious lodges and simple restaurants, is the most congenial spot for visitors.

Day 06: Pokhara
Enjoy a Sunrise view at Sarangkot followed by a Day Hike with lunch box.

Sarangkot is located on a mountainside ridge at an altitude of 1600m with panoramic Himalayan views. From Sarankot, on the northern direction we can see Dhawalagiri in the far west. Annapurna range is visible when the weather is clear on the same side. On the southern direction the village overlooks the city of Pokhara and its lake on the north-western outskirts of the city.

Overnight at the Hotel.

Day 07: Pokhara – Kathmandu
After breakfast at Hotel, transfer to the airport in time for your morning flight to Kathmandu. Upon arrival at Kathmandu airport, transfer to Hotel.

This afternoon, tour the Pashupatinath and Patan city

PASHUPATINATH:
6kms/4miles from Kathmandu City, Pashupatinath Temple is one of the holiest Hindu Temple dedicated to Lord Shiva. Situated amidst a lush green natural setting on the bank of the sacred Bagmati river, the temple built in Pagoda Style has gilded roof and richly carved silver doors. Visitors will be permitted to view the temple from the east bank of River Bagmati, entrance in the temple being strictly forbidden to all non Hindus. Pashupatinath is the centre of annual pilgrimage on the day of Shivaratri which falls in the month of February/March. Behind the temples are the cremation grounds.

Patan City: 5 kms. /3 miles away from Kathmandu City. Patan also known as Lalitpur is the city of fine arts, enclosed within 4 stupas said to be built in 3rd century AD by Emperor Ashoka. You will see the Durbar Square, the Patan Durbar which houses a bronze collection, the Krishna temple built by King Siddhi Narsingh Malla and Hiranya Varna Mahavir.

A trip to the Tibetan Handicraft Centre will also be done while, visiting Patan where you will witness the hand weaving of Tibetan carpets and moldings of metal statues.

Day 08: Kathmandu Departure
Breakfast at Hotel and then transfer to the airport for your onward flight.

$1595
Land only per person based on sharing

$1775
Land only per person based on sharing

$1950
Land only per person based on sharing