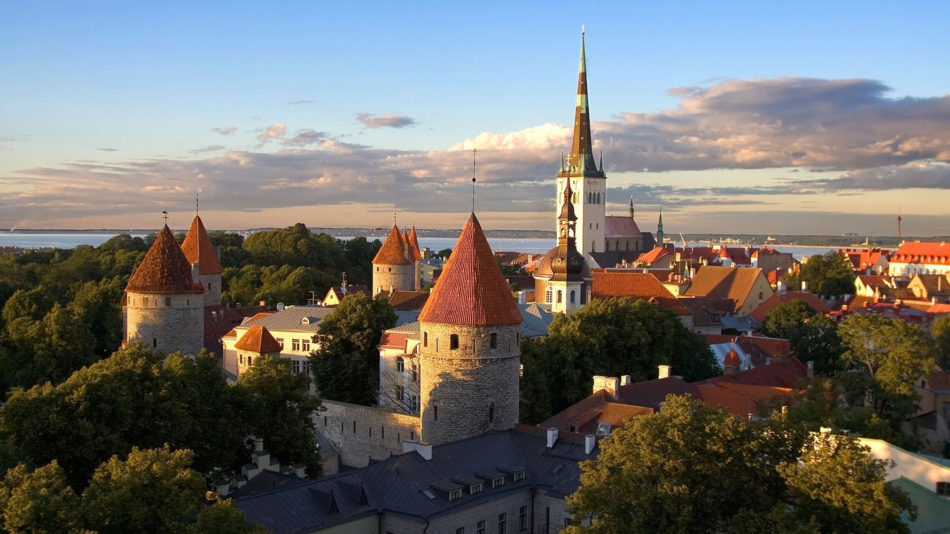 Waterways of Russia & Jewels of Baltic

Explore the lands and legacies forged by centuries of Baltic History; Cruise slowly and peacefully from Moscow to St. Petersburg through the Russian countryside.

Begin our journey in the beautiful Baltic region where examples of medieval and Art Nouveau architecture remain nearly untouched by the early 21st century. As the curtain opened, we can finally see what’s laid behind … now, sophisticated travellers are drawn to witness a world transformed.

Visit three distinct nations, three thriving capitals and the land in between as we discover for ourselves the fascinating heritage and stimulating contemporary life of this remarkable and diverse region.

The timeless pageant of Russia reveals itself in the scenic rivers, lakes and canals that link St. Petersburg with Moscow. Between these two great cultural capitals, there lies a countryside seemingly untouched by the 20th century. Golden-domed churches rise out of the early morning mist. Quaint wooden villages and old-world farms dot the verdant landscape. And the gentle light of early summer evenings gives an otherworldly dimension to the banks of Russia’s great “blue road” of inland waterways. Without a doubt, cruising Russia’s waterways is one of the best ways to explore the world’s largest country.

Aboard our intimate small ship – MS Sergey Rakhmaninov in the fabled city of Moscow, the political and commercial capital of Russia and the cultural frontier between East and West. Spend the first three nights to explore Moscow and its massive Kremlin complex and oniondomed St. Basil’s Cathedral.

From Moscow, cruise for six nights through the heartland of Mother Russia, where everyday life goes on at the measured pace it has kept for generations. Here, villagers still dwell in traditional wooden cottages and preserve the folkways of their ancestors, and onion-domed churches and fortified monasteries testify to the abiding faith of the Russian people.

Spend one night onboard the ship upon arrival in St. Petersburg, Russia’s “Window on the West” and the majestic legacy of that most visionary of czars, Peter the Great. Our program concludes with a Post-Cruise overnight stay in the city of St. Petersburg.

July 15, 2018 Arrive Vilnius
Arrival in Vilnius, transfer to Hotel to your hotel.

July 16, 2018 Vilnius (B/D)
Vilnius is known for its more than 1.200 medieval buildings and 48 churches. The morning sightseeing tour includes a panoramic tour of the city and a walking tour of the Old Town with Vilnius Cathedral, Gediminas Tower, Peter and Paul Church, St. Anne’s Church, Old University and the Gates of Dawn.

The afternoon, we take an excursion to Trakai, the medieval capital of Lithuania, with the well preserved Trakai Castle, beautifully located on an island in Lake Galve. In the evening enjoy a folklore dinner at Restaurant Belmontas.

July 17, 2018 Vilnius – Riga  (B)
Heading for Riga, the first stop is the Hills of Crosses, one of the most holy sites of Catholic Lithuania. After crossing into Latvia we soon reach the magnificent Rundale Palace, the former summer residence of the Duke of Courland. Following a guided tour of the palace we travel through the rolling hills of Southern Latvia to reach Riga late afternoon, check-in at Hotel.

July 18, 2018 Riga (B)
Before we get acquainted with Riga we have the possibility of discovering medieval Latvia. The morning tour takes us to the stunning scenery of the Gauja National Park and the town of Sigulda. We listen to the medieval Latvian legend of the Rose of Turaida and see the ruins of the Episcopal Castle and of the Castle of the Knights of the Sword before we return to Riga.

The afternoon offers an optional visit to the Ethnographical Open Air Museum, a spacious exposition of 18th century country life. The evening offers an organ concert at the Dome Cathedral.

July 19, 2018 Riga (B/D)
Founded in 1201 by the German bishop Albert, Riga is the largest of the three Baltic capitals and boasts a real kaleidoscope of architectural styles. The walking tour of the Old Town includes Riga Castle, the Dome Cathedral, St. Peter’s Church, the Swedish Gate, the Three Brothers, the Large and Small Guilds and the Freedom Monument.

The afternoon, you can take an optional visit to Jurmala, the vibrant Latvian sea resort, famous for its wooden architecture and sandy beaches. In the evening enjoy an Latvian dinner at the stylish Restaurant Forest.

July 20, 2018 Riga – Tallinn (B)
The tour continues along the coastal highway to the Estonian summer resort of Parnu. We do a short tour of the resort before we continue through the North Estonian land of forests and arrive in Tallinn early afternoon, hotel check-in.

July 21 2018 Tallinn (B/D)
Tallinn is a charming blend of medieval tranquillity and modern urban life. The medieval Old Town is a busy place in the summer with its many shops, galleries, souvenir markets, outdoor cafés and restaurants. The sightseeing tour takes us around the old medieval city walls and into the Old Town where we see Toompea Castle, Dome Church, Alexander Nevsky Cathedral, medieval Old Town Hall and Great Guild Hall. In the afternoon an optional excursion is offered to Kadriorg Park and visit to KUMU, the award-winning new Estonian art museum, with its collections of classic and contemporary fine art.
The evening, enjoy a medieval dinner at Restaurant Peppersack.

July 22, 2018 Tallinn – Moscow, embarkation (B/D)
Today, you are transferred to the airport for flight to Moscow and on arrival, transfer to your ship for check in. Welcome aboard!

July 23, 2018 Moscow, City Tour (B/L/D)
A full day tour with professional guide who will lead you through this thrilling city and tell you some interesting facts about its foundation and present-day life. Walk around infamous Red Square, a UNESCO World Heritage site where both Romanov czars and Soviet commissars flexed their might and power. Admire the multicolored grandeur of the 16th-century St. Basil’s Cathedral, one of the country’s most beautiful Orthodox monuments, and tour its marvellously intricate interior. The New Maiden Convent is picturesquely spread out in the Moscow River bend and the building of MGU (the Moscow State University) on the Sparrow.

July 24, 2018 Moscow, Kremlin & Cathedrals (B/L/D)
Today, visit “the heart of Russia” – the territory of the Moscow Kremlin. It is one of the largest architectural ensembles in the world, including monuments built over the time from the late 15th to the 20th centuries. Historically, the Moscow Kremlin has been the residence of power and today it is the residence of the Russian President. The monumental walls and towers of the fortress capture the look of ancient Moscow with the Kremlin’s golden-domed cathedrals, old chambers, magnificent palaces, and beautiful office blocks. The unique museum complex includes several cathedrals: the Assumption Cathedral, (the coronation place of all Russian tsars), the Archangel Cathedral (the burial place of Russian tsars before Peter the Great), the Annunciation Cathedral, the Tsar Bell, the Tsar Cannon, and Ivan the Great Bell Tower.

July 25, 2018 Uglich/ Volga River (B/L/D)
This morning, cruise through Moscow Canal, an impressive system of 11 locks over 80 miles and into the Volga River, the main artery of the Russian heartland for over a millennium. In the 10th – century “Golden Ring” town of Uglich, walk to the small 17th-century Church of Prince Dimitri-on-the-Blood, built on the site where Ivan the Terrible’s young son met his demise. Admire its cluster of red turrets capped with spangled blue onion domes and the elegant frescoes that adorn the inside. Continue to the stately five-domed Cathedral of the Transfiguration to view the ornate icons throughout the cathedral’s large, vaulted interior”.

July 26, 2018 Yaroslavl/Lake Rybinskoye (B/L/D)
Today, dock in Yaroslavl, the oldest town on the Volga River and one of the “Golden Ring” of fortified cities surrounding Moscow. This UNESCO
World Heritage site is also known as the “Florence of Russia,” and is famous for its authentic Russian churches with their painted onion domes and soaring turrets. Stroll along the river to the Church of Elijah the Prophet, a masterpiece of local architecture located in the heart of the Old Town and filled with well-preserved frescoes. Then see the fortified Monastery of the Transfiguration, founded in the 12th century. Later, the ship cruises through the scenic wilderness of Lake Rybinskoye.

July 27, 2018 Goritsy / Lake Beloye & Sheksna River (B/L/D)
Along the shores of Lake Beloye, see rural communities continuing the traditions of Old Russia. From the tranquil village of Goritsy, visit the Kirillo-Belozersky Monastery, founded in 1397. It is said that Vasily III, the first Czar of Russia, came here to pray for an heir, and soon after, his wife Elena gave birth to the future Ivan the Terrible. Along the Sheksna River, catch glimpses of a bygone era as you pass rustic family farms and quaint dachas, the seasonal cottages of Russia’s elite.

July 29, 2018 Mandrogy/Lake Ladoga/ Neva River (B/L/D)
Cruise the sparkling Svir River between Lake Ladoga, the largest freshwater reservoir in Europe, and Lake Onega, known for its almost 1400 islands. The ship calls at Mandrogi, a small riverside village, one of the most beautiful and environmentally sound places built in 1996 on the place of an ancient settlement. After our visit and shop for some souvenirs, be on deck to admire the passing wilderness of serene meadows and virgin pine and birch forests as your ship heading to St. Petersburg.

July 30, 2018 St. Petersburg, City Tour (B/L/D)
Enjoy exploring the city’s legendary landmarks, which are scattered across more than 100 islands linked by six times as many bridges. St. Petersburg’s main thoroughfare, Nevsky Prospekt, showcases exquisite examples of Russian Baroque and neoclassical architecture. On the morning tour, see the beautiful Church of Our Saviour on Spilled Blood (Church of the Resurrection of Christ), built on the site of Emperor Alexander II’s assassination, and the 19th-century St. Isaac’s Cathedral, with a striking golden dome that is one of the glories of the city’s skyline.

July 31, 2018 St. Petersburg, Hermitage (B/L/D)
Enjoy a tour of the State Hermitage Museum, former palace of Catherine the Great and repository of one of the world’s oldest and greatest art collections. View the priceless collection of 19th and 20th century French Impressionist and Post-Impressionist works as well as the controversial group of 74 masterpieces “lost” in a storeroom since World War II and found in 1995. Its spectacular collection is rivalled only by the museum’s ornate interiors. The afternoon is yours in St. Petersburg, or you can choose to join the optional excursion to skim over the Gulf of Finland by hydrofoil to Petrodvorets, the splendid palaces and parklands commissioned by Peter the Great and now a UNESCO World Heritage site.

Aug 1, 2018 St. Petersburg, disembarkation – Home (B)
Your cruise ends today, disembark and transfer to the airport for your flight home.

Based on Main Deck

$3450
Land only per person based on sharing

Based on Boat Deck

$3675
Land only per person based on sharing

Call 1-888-887-1688 or email info@tripconnoisseurs.com
to arrange the international flights for this journey from your home city.